It’s easy to naively show up at the first game of a new season thinking that you’ll be leaving with clear signals of which teams will finish at which end of the table. Not so Saturday at the TD Place in Ottawa, where Atlético Ottawa beat Cavalry FC 1-0 in their Canadian Premier League season opener with a late penalty from Brian Wright.

True, last season’s bottom side beating playoff semi-finalists is a green sprout of hope for the home team, but in truth it was a game in which neither side carved out any clear-cut opportunities and neither side could claim to have controlled the game to any significant degree.

But not granting any clear-cut opportunities to their opponents must go down as an enormous sign of progress for Atlético Ottawa and their new coach Carlos Gonzalez. Last year’s team had a remarkable tendency to take careful aim at its own foot and shoot repeatedly, in the form of conceding penalties, defensive disorganisation and individual errors.

Saturday’s backline of Beckie, Niba, Espejo and returning local Maxim Tissot looked comfortable even after Beckie was sent off for ridiculously treading on the foot of Cavalry’s David Norman – old self-sabotaging habits appear to die hard. Criticism for the referee for the decision feels unwarranted: it’s not unfair to expect an experienced team captain to know better when defending a lead in the dying minutes of a close game.

Beckie handed the captain’s armband to Diego Espejo, who had been both an imposing and calming presence all afternoon. A central defender who is comfortable on the ball is worth his weight in gold in the modern high-pressing game, and Espejo certainly fits the bill.

In an Ottawa side that often looked nervous about passing progressively, Espejo was one of the players bold enough to try, searching for Brian Wright and Malcolm Shaw in an Ottawa front line that often looked quite isolated. Both Wright and Shaw are gifted offensive players, but when there are two bustling attackers adept at holding up the ball, a team screams out for a quick player running in behind. 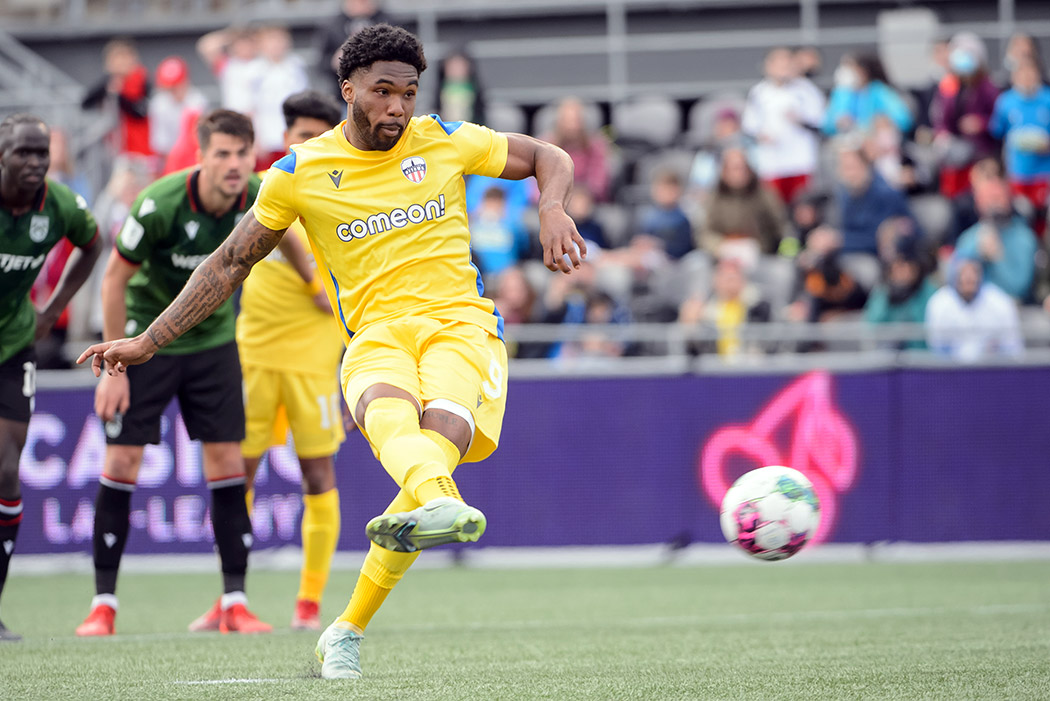 Perhaps in the future that player will be Ballou Tabla, but today the former Barcelona man was well off the pace and was substituted after just 58 minutes for the altogether more mobile and hardworking Miguel Acosta. Tabla’s afternoon would have looked very different had the rebound from Keven Aleman’s fierce long distance shot in the ninth minute fallen more kindly to him. He controlled it on his chest, but the shot was difficult and came off the top of the crossbar.

“It could have been us that left here with the three points,” said Cavalry coach Tommy Wheeldon Jr. after the match, and it’s a fair conclusion. He was forced with withdraw Ali Musse with 15 minutes to play with Cavalry in the ascendancy due to his lack of full match fitness, which blunted the visiting team’s main outlet.

Musse was lively both with and without the ball, pressing well and running aggressively at Ottawa’s back line. Without him, Cavalry resorted to hopeful crosses and set-pieces that produced little more than half-chances. Nathan Ingham in the Ottawa goal produced a couple of saves but in truth he was never really threatened.

The goal, when it came, resulted from one of Ottawa’s best plays. Abdou Sissoko came off the bench and immediately took charge of the midfield, playing a through ball that released Aleman, who found Acosta in acres of space via a deflection off José Escalante. The prone Cavalry substitute flung himself at Acosta’s shot, taking the sting out of it with his hands for an obvious penalty. Brian Wright converted calmly.

After the game, Carlos Gonzales was grateful for the result – “it’s better to work on building the team through a win” – but acknowledged that there is still a lot of work to do. “We have been working with the team only 5 weeks. We have to keep calm, we have to have patience. This is not about pressing a button and having all that you want.”

The new Ottawa coach has so far cut an impressive figure, speaking clearly and authoritatively about what he wants from his players. It’s clear that there’s still a lot of work to do, but with three hard-won points on the board, Atlético Ottawa fans – of whom there were an impressive 5,390 in attendance on a moving afternoon that doubled up as a fundraiser for humanitarian efforts in Ukraine – have plenty of reasons to be hopeful.