Calgary soccer fans are rejoicing at the news that professional soccer will be coming to the city in 2019. Last week Cavalry FC was unveiled as Calgary’s newest professional sports franchise during a launch event at Spruce Meadows just south of Calgary.

Spruce Meadows Sports and Entertainment will own and operate the team, that will compete in the new Canadian Premier League when it kicks off in April 2019. The club will play its home games at a new 5,000-seat stadium, to be built at Spruce Meadows.

For local soccer fans like Sean Clarke, a member of the Calgary Foothills FC supporters group The Foot Soldiers, the launch of a Calgary professional soccer club is very welcome.

“It’s phenomenal. A lot of people have asked ‘Why come to Calgary?’ And I think the last hour, has shown it.” – Nik Ledgerwood, Canadian international soccer player

“Honestly, this is probably the most exciting time I’ve had in this city as a fan,” said Clarke, who attended the Cavalry FC launch along with other members of the supporters group Thursday. “We’re all incredibly excited. We can’t wait for the return of professional soccer for this city and we hope we grow the club.”

John Leung, a fellow Foot Soldier, admitted to having difficulty containing his excitement at the club’s launch Thursday.

“We have a top level team and world class home,” exclaimed Leung. “I cannot be any happier. It’s going to be a raucous party.”

Fans aren’t the only ones excited for the arrival of professional soccer to Calgary. Local soccer players, too, are welcoming Cavalry FC – including current Calgary Foothills FC players Nik Ledgerwood and Marco Carducci, who were both at Thursday’s launch event.

Both players currently play for Calgary Foothills FC, a semi-professional club playing in the Premier Development League. But both admit they moved to Calgary this season anticipating a professional team’s formation, thanks in part to conversations they each had with Tommy Wheeldon Jr., who currently is Calgary Foothills FC coach and technical director and who will take up general manager and coaching duties for Cavalry FC in the fall. 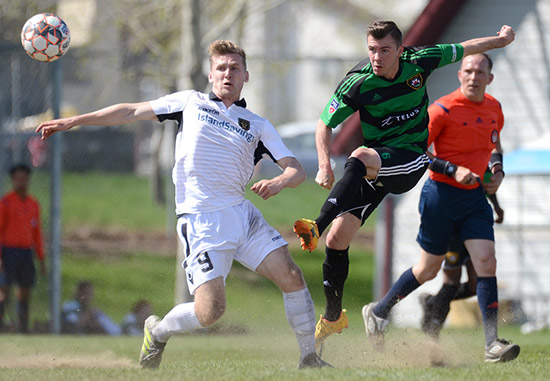 “It’s phenomenal,” said Ledgerwood, a midfielder with 50 caps for Canada. “A lot of people have asked ‘Why come to Calgary?’ And I think the last hour, has shown it.

“Tommy sold me on the vision before about what’s going to happen here, but this just made it solid,” admits Ledgerwood. “Made the dream come reality. I couldn’t be happier.”

“I’m super excited, obviously,” said Carducci, who has played for Canada at U17, U20 and U23 levels. “I think a lot of people have been waiting a long time for this. And now that it’s officially official, it’s pretty cool. 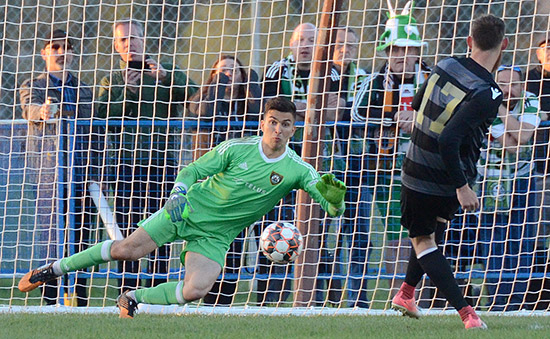 “It’s why I’m here. To be involved in this. I had those conversations with Tommy, with this as potential and now that it’s here. It’s right there in front of you and it’s something to look forward to, but it’s definitely something I want to be involved in.”

Ledgerwood also envisions himself taking to the field in Cavalry FC’s inaugural season next year.

“I hope so,” smiled 33-year-old Ledgerwood, when asked if he’ll be playing for Cavalry FC in the Canadian Premier League in 2019. “Nothing’s concrete yet, but I definitely have years left, definitely.”

Spruce Meadows plans to succeed where others have failed

This isn’t the first effort to bring professional soccer to Calgary.

And Stuart Wallington, another member of the Foot Soldiers supporters, has served witness to the previous attempts at launching pro soccer in the city – including the Calgary Boomers and Calgary Kickers in the 1980s and the Calgary Mustangs and Storm in the 2000s.

But he, like many others, is confident this time is different and that Cavalry FC can succeed where the others have failed. 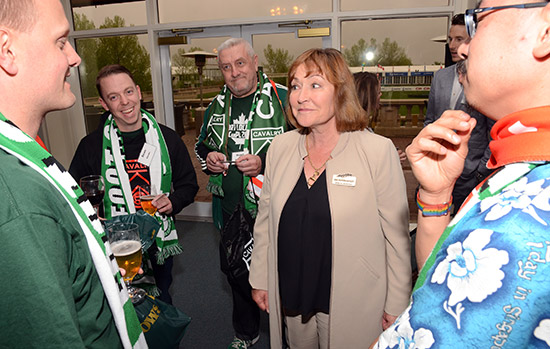 Early efforts took place in an era when soccer wasn’t as popular in Canada as it is currently and more recent efforts found the club’s competing in USA-based leagues, which is often recognized as a success limiting situation for Canadian soccer teams.

But previous attempts didn’t have the considerable and experienced weight of Spruce Meadows Sports and Entertainment behind them. And Wallington sees this as key to the new club’s prospects.

“Everything’s in place,” said Wallington, at Thursday’s launch. “It’s the first time I can remember that it’s been done in such a professional way. This is the most impressed I’ve been with any pro soccer team in Calgary. It’s amazing.”

At one point during the event Linda Southern-Heathcott, owner of Spruce Meadows and Cavalry FC, took the time to introduced herself to Wallington and his fellow supporters, discussing the team and handing out business cards. This, he says, is a very positive sign.

“It’s fantastic to meet the owners and see how enthusiastic they are about having this team here,” said Wallington. “It’s amazing that we have these people in Calgary to support teams like this.”

Cavalry FC is offering a $50 ‘membership’ they say will provide front-of-line access to buy tickets when they eventually go on sale. Season ticket holders will receive tickets to 16 home matches per year – 14 CPL matches and 2 special event matches. The CPL season will run from April to October.