Calgary Foothills FC’s Nik Ledgerwood says he recently signed with the club with the aim of helping grow the soccer community and culture in Calgary and in Canada.

The 33-year-old Canadian international signed for the semi-professional Premier Development League (PDL) club in January and he still sees that move as a natural stepping stone towards playing in the Canadian Premier League (CPL), the soon-to-launch professional Canadian soccer league which is set kick-off in April 2019.

“I always had the vision of coming back home one day to help out move soccer in Canada in the right direction,” says Ledgerwood, speaking at the Calgary Foothills fieldhouse earlier this month. “With the facilities here, the long term goal, with the CPL coming around. It’s very exciting. For me it was a no-brainer.”

Foothills FC head coach and technical director Tommy Wheeldon Jr. is pleased with the signing of his former teammate, Ledgerwood, who has spent most of his playing career in Germany prior to joining FC Edmonton in 2016.

“We’ve kept in touch over the years,” says Wheeldon.  “I was the older statesman when he played before he left the Calgary Storm. I just kept tabs with him. And it was more a bit of fortune – with the domestic league launching he wants to be in Canada around there. That’s why he came back to play with FC Edmonton.”

“With FC Edmonton folding, he had a choice. He probably could have gone back to Germany. Or (he could) stay with us and help us grow this with players that want to play in the Canadian Premier League, and that’s what he chose.” 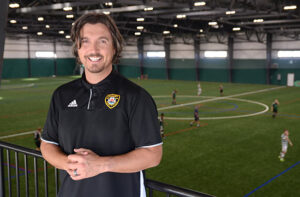 Ledgerwood, who has 50 appearances for the Canadian national team on his resume, admits that participating in the CPL’s inaugural season in 2019 remains the ultimate goal.

“Obviously, I want to be a part of the CPL,” says the Lethbridge, Alberta born midfielder. “The overall vision is to help move soccer in Canada in the right direction. With the CPL, that’s the only way Canada soccer is going to move forward. To be able to be a part of that from the get-go is exactly what I wanted to do. I don’t think there’s going to be a better place in Canada to do it than Calgary.”

Wheeldon says Ledgerwood isn’t the only Canadian soccer player considering local opportunities, with their sights on the national league’s launch. 21-year-old Calgary born goalkeeper Marco Carducci, a Vancouver Whitecaps reserve team product and Canadian U-23 international, also recently signed with Foothills FC, reportedly with an eye towards being prepared for the CPL’s launch next year.

“We’re going to go out and try to win every game.” – Nik Ledgerwood, Calgary Foothills FC

“We’ve got a lot of interest this year,” he says. “I think the excitement now with the Canadian Premier League on the horizon, it’s an ignition switch for young Canadian players. A lot of players are choosing to come back to Canada. Nik Ledgerwood is a great example of it. These players are hungry, they want to help grow the Canadian game. We’re in a competitive league in the PDL. They know with the environment of training we have, they’re in the right place to get the preparation when the CPL launches.”

As well as the PDL club, Calgary Foothills also operates a soccer academy with youth clubs represented at all levels. And Ledgerwood is already chipping in with helping train players as young as 11-years-old.

“We’re integrating the professional players to help with the next generation of players coming through,” says Ledgerwood. “Not only is it good for us to get into a coaching role, but it’s also good for the kids to be involved with professional players. You get a hands on training session with guys that are on the weekend, going to be playing professional games. The way it’s set up here is phenomenal. It’s a full circle. Players and coaches helping everyone to improve.”

“He’s helping coach the kids, he’s helping inspire the community,” says Wheeldon. “And for me, there’s nothing more Canadian than that, helping pay it forward. And Nik is a class-act for doing that.”

But in the coming weeks, Ledgerwood’s efforts will primarily be devoted to preparing for the upcoming 2018 PDL season, which kicks-off for Foothills FC against Victoria Highlanders FC in Calgary May 11.

“It’s a shorter season than I’m used to,” he admits. “But it’s all about getting the core group of guys together, getting the fitness ready and ultimately we want to win. We’re going to go out and try to win every game. The goals are going to be long-term going forward, but obviously we’re going to put out a team that’s going to compete.”