Canadian U-23 national team goalkeeper Marco Carducci has returned home to play for Calgary Foothills FC in the upcoming the 2018 Premier Development League season, with plans on moving up to the Canadian Premier League when it launches.

“Calgary is my hometown, so this is an exciting opportunity to come back home and represent my city and be involved in what’s growing here,” says Calgary-born Carducci, who signed with Foothills FC in February.

Sign-up for Calgary Foothills FC updates and other Calgary soccer news via email.

The 21-year-old says he was lured home after hearing the future vision and plans of Foothills FC’s head coach Tommy Wheeldon Jr.

“…there’s obviously a lot of news and a lot exciting stuff in the future, but our first priority is the PDL season.” – Marco Carducci, Calgary Foothills FC goalkeeper
“I was playing in the USL last season (with Rio Grande Valley FC Toros). My contract ran out at the end of the year. I got in touch with Tommy. From day one I was onboard with the vision moving forward. I just couldn’t turn down the opportunity.”

“He had other offers on the table with USL,” says Wheeldon, who also serves as Calgary Foothills technical director. “But I said,’look, how’s about coming home? Be Calgary’s guy.’”

“And we can hopefully build a team around him. And while this happens, there’s a Canadian Premier League down the road and he’s already back home in his hometown.”

Wheeldon remembers being impressed with an 8-year-old Carducci, when he first saw him playing for a U-10 community team in Calgary in 2005.

“I remember thinking this kid had unbelievable hands and feet,” recalls Wheeldon. “And I’m thinking, this kid’s only 8-9 years-old?”

To pursue a future in soccer, Carducci eventually left Calgary to attend the Vancouver Whitecaps FC residency, as there was no equivalent development opportunities in his hometown at the time. He would spend nearly seven years with the west coast club.

“I think everyone goes through a lot of different challenges,” admits Carducci. “I was 14 when I left. That was definitely difficult. Leaving home was not easy, for sure. Again, like I said, the opportunity that’s all there was and I was stone set in chasing after that. As much as that was a challenge, it was also something I was really looking forward to. It was a fantastic experience.”

It pleases Carducci to see the local opportunities young players are getting now thanks to the Calgary Foothills youth system.

“Now with what’s going on here, it’s exciting,” says Carducci, who captained U17 Canadian national team at 2013 FIFA U-17 World Cup. “Young kids 14-years-old or even younger have something to look up to, and Foothills from the ground up, is building that.”

And with the Canadian Premier League rumoured to be coming to Calgary in 2019, the keeper anticipates even more opportunities for Canadian footballers in the near future.

“Obviously with the news of the CPL coming, it’s exciting for everybody.” 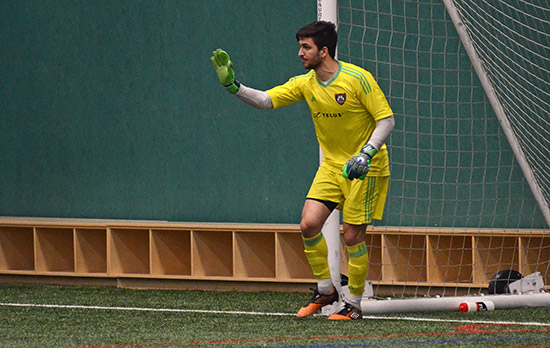 But for the time being, Carducci has one focus.

“Our goal is to win the PDL championship, as simple as that,” says Carducci. “Looking forward there’s obviously a lot of news and a lot exciting stuff in the future, but our first priority is the PDL season.”

And his new coach is looking forward to how the keeper will contribute to the 2018 season.

“What he brings, is everyday, he comes in with professionalism,” says Wheeldon. “He works hard, he plays hard. And he’s great in the locker room. He’s a class act.”

(Note: An earlier version of this article stated incorrectly that Wheeldon said he first saw Carducci in 1995. This has since been corrected to 2005)