Canada heads into Thursday’s World Cup qualifier in Costa Rica on the verge of reaching Qatar 2022.

A win will send Canada to its first World Cup since Mexico 1986. A draw would likely be enough. And Canada could even lose Thursday and still progress, depending on results elsewhere.

“I don’t think anyone wants it to end,” admitted head coach John Herdman, speaking to the media Sunday. “We’ve really enjoyed the experience (of the qualifying campaign).

“When you look back, there’s been some amazing moments that I think have shaped the team. As a staff, as coach, as a player group, we’ve grown. We’ve grown massively through this period.”

And Koné has clearly made an impression on Canada’s coach during his short time in the limelight.

“For me I haven’t seen a profile like that from a midfielder in the time that I’ve been here,” said Herdman. “So he’s definitely someone I think can contribute and help this team over three games.”

“If you’re good enough, you’re old enough in my book.”

Canada will be without talisman Alphonso Davies for the second consecutive international window,

The 21-year-old winger was diagnosed with the heart condition myocarditis mid-January, after contracting COVID-19. Davies has since returned to training for his club Bayern Munich. But he’s still waiting to be fit enough to play. 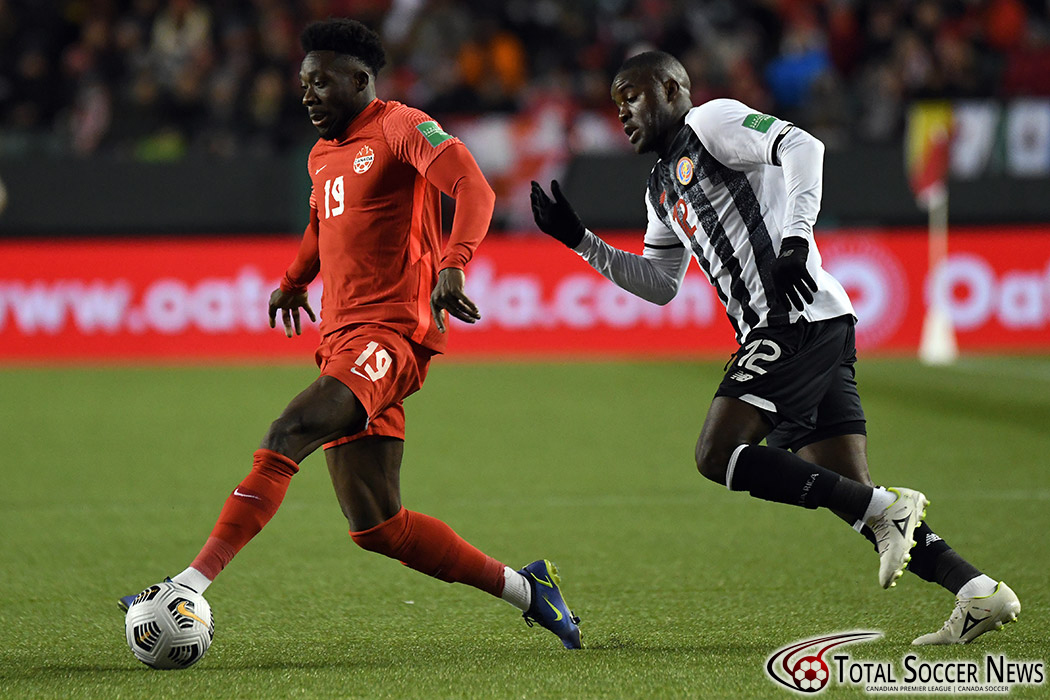 And Canada’s coach appreciates the situation and agrees with the treatment his star player has received thus far.

“There’s bigger things ahead,” said Herdman. “I think his health, anything around the heart is so precarious. I think all of us just want to make sure he comes back to full health. The best place for him to be is with Bayern Munich, and the medical people there that have managed his recovery this whole period of time.”

Canada managed well without Davies in January’s window, winning all three games. And while Herdman is expecting to cope without Davies again, he suggested the Bayern winger could make his way out to meet the Canadian squad sometime over the next ten days to celebrate the expected qualification.

“There may be an opportunity, and we’re working with Bayern to see if we can have him in and around the environment at some stage. But again, his recover will come first.”

When asked about how he’s kept squad continuity during the World Cup qualifying campaign so far, Herdman admitted a major consideration was loyalty.

“The simplicity for me is, there’s a group of men that have committed since the beginning of this octagon,” he said Sunday. “Some of them traveling to Haiti, some of them travelling to Orlando to play Bermuda in March when you had massive COVID risks. Some have been right on the journey since 2018. And others even longer.”

If Canada fails to secure qualification Thursday in Costa Rica, two more opportunities follow soon after. The Canadians host Jamaica in Toronto Sunday before wrapping up the qualifying campaign in Panama Wednesday.

Herdman is visibly confident of reaching Qatar, but he’s not taking anything for granted.

“I think this is probably the toughest schedule in terms of heading into Costa Rica in must win match for them at altitude and heat,” he said Sunday. “(Then) back to Canada against a team like Jamaica with their quality that can play free without the burden of qualifying. And then we’re off to Panama who will be in another must-win game.”

And while three positive results this week would bolster Canada’s chances of getting a better draw in Qatar based off the FIFA World Rankings, Herdman says he’s squarely focused on the next game and earning a place in the draw first.

“But that 90 minutes of football in Costa Rica is all we’ve got on our mind. Just let’s get it done.”