It has already been a season to remember for Pacific FC. The Tridents have much to be proud of sitting atop the Canadian Premier League table and having reached the Canadian Championship semifinals.

But 2021 isn’t over and Pacific FC is aiming for more. They want the first playoff seed, to win the league and to win the cup. Here’s how things look with just over a month left in the Canadian Premier League season.

Pacific have seven matches left in their regular season. They take on FC Edmonton twice, Cavalry FC twice, then HFX Wanderers, York United, and Valour FC once each. Each one of these games has many implications for their bid at the first seed.

Chief among these are the tilts against Cavalry FC. Since the Calgary side sits merely four points back with one game in hand, the matches against them will prove critical to maintaining their lead. PFC have done well against Cavalry on the head-to-head record, going 3-1-1 in all competitions this season. However, Tommy Wheeldon Jr.’s team has consistently made life hard for the Tridents. It’s never an easy game against them, and the Tridents will need to be on full alert.

With all due respect to FC Edmonton, these two matches should be six points for PFC. Every side in the CPL should be respected but for a title contender like Pacific, they’ll want results out of these games. And that hasn’t been easy. The purple-and-teal have looked questionable against Atlético Ottawa and FC Edmonton in September, needing late equalizers to salvage a point. It’s something that shouldn’t be happening, and Pa-Modou Kah will be telling his men every point is crucial at this juncture of the season.

York United might be a preview of what is to come in the CPL playoffs. If the seeding remains as is, Pacific FC will draw against York in the single-match playoff. It will be a tough encounter as always, but PFC currently does hold the edge with a win and a draw. Expect plenty of action and lots of goals, with both teams having a high-gear, offensive style of play.

As for HFX Wanderers, the men in purple-and-teal will want another three points in this match. The Wanderers sit firmly in the middle of the table, looking bang average as the season has progressed. For PFC, winning convincingly over their far east counterparts could prove to be a momentum builder heading into the final days of the season.

Visit to Toronto for the Canadian Championship semifinals

Of course, possibly the biggest match will be against Toronto FC in the Canadian Championship semis. Drawn away at BMO Field on November 3rd, it will be a tough, tough task for Pacific to come up with another upset.

While TFC currently mired in the basement of Major League Soccer, their form has improved to five matches undefeated, as well as possessing a quality advantage over the Tridents.

That being said, it certainly isn’t the first time these descriptions were made about Pacific. They showed that they are fully capable of a huge upset against Vancouver Whitecaps FC, and if there is any roster capable of pulling off another giant-killing, it is Kah’s men. It will make for a very interesting match, and the dream run to the final is a storyline that cannot be missed.

Much has been made about Marco Bustos’ absence from the squad, having missed a full month since the Ferryside Derby. Full credit to the depth that Pacific FC accumulated though, as it has been during this time that they have built a little lead in the league.

With big performances from Ollie Bassett and Manny Aparicio, the rest of the team has gelled around to get the job done. Players have taken the step up to supplement the big guns to spur on the charge to the top. 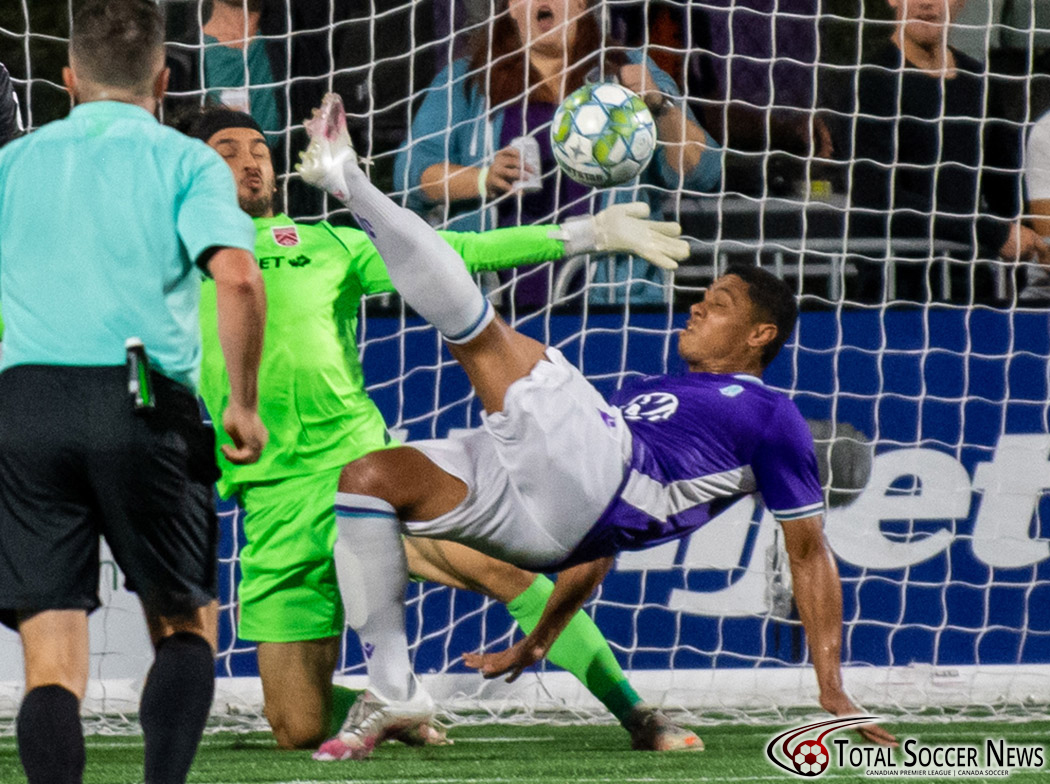 Forwards Alejandro Diaz and Terran Campbell were the ones to supply offense. Since Bustos has gone down, these two have taken the minutes and ran with them. Diaz leads the team with nine goals, while Campbell isn’t far behind with seven. With the pair getting hot at the right time, the goals are coming in bunches and in a time that Pacific definitely needed them. They’ll be wanting to contribute in October as they did in September, a final spur onwards.

At the back, Lukas MacNaughton has really taken that next step up in his development. The defender was once known as the first player ever sent off in Pacific FC history, but now, he’s been a rock at the back. His tally against the Eddies was the late dramatic equalizer to grab a point, showing that he can get on the scoresheet too. MacNaughton will be one to continue to watch, still young and still developing.

Kadin Chung has been excellent this year as well. The right-back has shown why he was so highly regarded, improving each and every season of the CPL. This year, he’s led the league in interceptions, providing necessary defending and plenty of spark offensively. His goal against FC Edmonton on September 4th was an absolute worldy, for example. Other than that though, Chung’s passes and crosses into dangerous areas have provided PFC’s forwards with plenty of service.

Not enough has been made of Callum Irving’s season, either. Boring is good for a keeper, and in a sense, Irving has made it boring at the back. Solid in between the woodwork, he’s currently tied for the league lead in clean sheets with seven. Irving has come up with big saves in big moments and looks to continue that into the last part of the year.

Pacific FC take on FC Edmonton on October 6th away at Clarke Field. The game is set to kick off at 6:00 PM PDT.

Michael is a kinesiology student at the University of British Columbia and an avid sports fan. He covers a variety of UBC varsity teams and Pacific FC of the Canadian Premier League.