Head coach Tommy Wheeldon Jr., who will be moving on to manage Cavalry FC, Calgary’s new professional Canadian Premier League team, at the end of the season, spoke with Total Soccer Project about his club’s success so far and how they are preparing for the upcoming semifinal:

Calgary Foothills FC beat FC Tucson and Colorado Rapids U23 in the Western Conference championship to reach the PDL semifinals. What’s your verdict on how things have gone so far?

“The boys were brilliant. It might be one and a two nil scorelines, but it was the manner in which they played. Colorado Rapids U23 is a very good team themselves – champions of their division for a reason and a feeder club to another MLS team. But we seem to enjoy playing these MLS feeder systems, because it makes us raise our game.

“There are lots of really exciting prospects and I’m hoping a bunch of them come with me (to Cavalry FC). But even if I don’t take them all, they’re going to be littered around the CPL because they’re young Canadian talent.” – Tommy Wheeldon Jr., Calgary Foothills FC head coach and future Cavalry FC head coach and GM

“The boys haven’t conceded in five games. We’ve won nine straight. And it’s because they’re all buying into their work. When they have to defend, they defend as a group. And when they attack, they attack as a group.

“When you’re without players like Nik Ledgerwood, Moses Danto, Jordan Haynes, Kyle Jones. These are key personnel for us. But whoever’s gone in and done it, they’ve done their job and they’ve executed game plans brilliantly.”

What’s the mood in the camp and how have you been preparing for Saturday’s semifinal against Chicago FC United?

“Anytime you’re on the road, and back to back games, in the sun and the heat of California was tough. Sunday was a travel day, Monday was a stretch, roll out, recovery. Some of the guys that didn’t get a tonne of minutes did a bit extra.

“Tuesday was really good development on our habits. We’ve been very habitual in our training. How we press, how we possess. Today (Wednesday) was a day off. They need it mentally, but the spirit has been first class. We have that ethos of hunting together, but they actually enjoy each other’s company. Any successful team I’ve been around, it starts with the team culture. And there’s a nice quiet confidence about them, but a steal focus.” 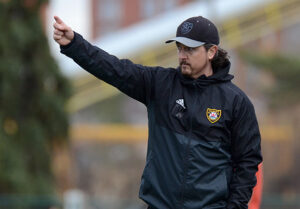 What do you know about Chicago FC United?

“They’re underdogs. We take underdogs seriously. We were underdogs in 2016. Now obviously we have to be one of the favourites.

“We’ll approach them the same we do with every team. We’ll show them the utmost respect, because they’ve earned it, by being there. But we’ll try to pick apart where we feel they’re flaws are and try and nullify their strength. We’ll have our game plan to be the best that we can be. The boys have done that with 16 games so far. We’re hoping to play even better in front of a home crowd as well. It might give us the extra 10 per cent.”

“We have to play on the front foot. The forward thinking with our passing and our play. We’re going to be getting at them, attack-wise and wide areas. We’re going to be filling the box. When we don’t have the ball, we’re going be trying to hunt them down and get our pressing game working like it usually does.

“We’ll do what’s successful for us so far. And if that’s not successful we have plans B and C up our sleeve as well.”

What happens for the winner of this upcoming semifinal?

“It’s one-off games now. Reading United (Pennsylvania), who are seeded number one because they have the higher league points, play The Villages (Florida) in the other semifinal. Higher seed gets opportunity to host. Should Reading win, they would automatically get first slot. If they don’t and The Villages win and we win, then we would get the opportunity to host the final. And it’s on Saturday, August 4.”

You’re going to become the GM and head coach for Cavalry FC, Calgary’s new Canadian Premier League professional soccer team, after the PDL season, so it’s no secret that some of the current Foothills FC squad will likely play for Cavalry FC next year. What can you say about those players and the experience they’re gaining in what has been a successful PDL season?

“The way we set this program in the spring, this was an audition for talented local players, whether from Calgary or around, to audition for the Canadian Premier League. The ‘Path to Pro’ tagline that the USL uses for the PDL holds true now. All we’ve done really is created an opportunity for the lads to be part of the culture that we’ve created here, but audition to move on with me to the pro level.

“And I tell you, there’s a really good core of guys that will be making that jump with us, and it’s because of their character and capability and the culture that they’ve contributed towards. We live by the capability of what they can do as a player, the character of what they can do as a person and the culture they add to. If they add to that, they’ll be a very effective member of the community we’re trying to build.”

For those not very familiar with all the members of the Calgary Foothills FC squad, who are the players you suggest new fans keep an eye out for on Saturday?

“We’ve got a squad full of great players. But Moses Danto is leading scorer, with 11 goals. He’s a big number nine. He’s exciting. Danto (Sudanese-born Canadian citizen) has a visa issue that prevents him from traveling over the border to the USA, so he missed the previous two games in California. We’ve always known about that with him. He’s always good in the Canadian games. Now that we’re back home, we get to unleash the beast again.

“You look at Marco Carducci who is one of the best young goalkeepers around. A local lad. 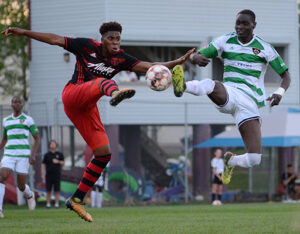 “Elijah Adekugbe, another local lad, who had to miss all of 2017 through a snapped Achilles tendon. He’s brought himself back and has our highest minutes.

“You look at the season that Nico Pasquotti and Carlos Patino have had in number of assists.

“You look now with Ali Musse, who has just stepped his game up again to show that he’s a match winner when it counts. There are lots of really exciting prospects and I’m hoping a bunch of them come with me (to Cavalry FC). But even if I don’t take them all, they’re going to be littered around the CPL because they’re young Canadian talent. And we need a bunch of these players populating the league.”

What kind of game day experience can fans expect Saturday?

“Food trucks, music, beer garden, kids zone. We’ll have an unbelievable level of football going on. I’m sure the Footsoldiers Supporters Group will be in fine voice. We’re going to stream the game.

“What’s wonderful about Okotoks is, we’ve seen it with the Okotoks Dawgs (baseball) and Oilers (hockey) when the playoffs hit, they love crowd. We’ve seen it when we hosted the Seattle Sounders U23 in 2016 we got a bout 1,500 plus. We would love to replicate that so it becomes another great chapter for soccer in this city and area.”