Atlético Ottawa navigated a rainstorm and lightning delays to returned to winning ways with a 2-1 victory over FC Edmonton in the nation’s capital Sunday.

The dark clouds had been gathering for a while, figuratively at least. In Atlético Ottawa’s last home game, Forge had come to town and taught them a painful lesson with an emphatic 0-4 scoreline. Goals from open play had been hard to come by in recent games.

And perhaps most worryingly of all, in a week when the CPL once again confirmed that any team without the required 2,000 minutes for under-21 Canadian players would not be allowed to participate in the playoffs, Ottawa would need a minimum of 106 minutes from every remaining game to avoid undoing all of their promising work on the pitch this season.

It was therefore a relief to see both Zak Bahous and Zachary Roy in the starting eleven for Ottawa against Edmonton, but the dark clouds – at least the ones over TD Place, bouncing with 6,574 fans – continued to gather. Kick-off had already been delayed due to one thunderstorm and another was brewing, but in the meantime, the beating sun was painfully hot as temperatures soared. The tempo on the pitch was therefore understandably low, but Zachary Roy was an important outlet down Ottawa’s right. His industrious running kept finding space, first for a low shot saved by Andreas Vaikla and then to link up with Ollie Basset, whose searching cross to Carl Haworth was smartly intercepted by Wesley Timoteo.

And then the heavens opened. The rain came in torrents, but it seemed to galvanize both teams. After the match, Ottawa coach Carlos Gonzalez revealed that his team had planned different tactical approaches for the different weather conditions.

“With rain, simplify. Play forward, avoid near passes,” he said, and this more direct approach worked well – but Edmonton had a plan too.

Azriel Gonzalez tested Nate Ingham with a very long-range effort, the bounce off the skiddy surface nearly beating the Ottawa keeper. As visibility decreased dramatically, Vaikla got down well to paw away a Macdonald Niba header but the best chance of the half fell to Haworth breaking clear. Vaikla sprinted out of his box to force him into an early shot, which bounced almost in slow motion towards the goal before agonisingly clipping the post and trickling wide. 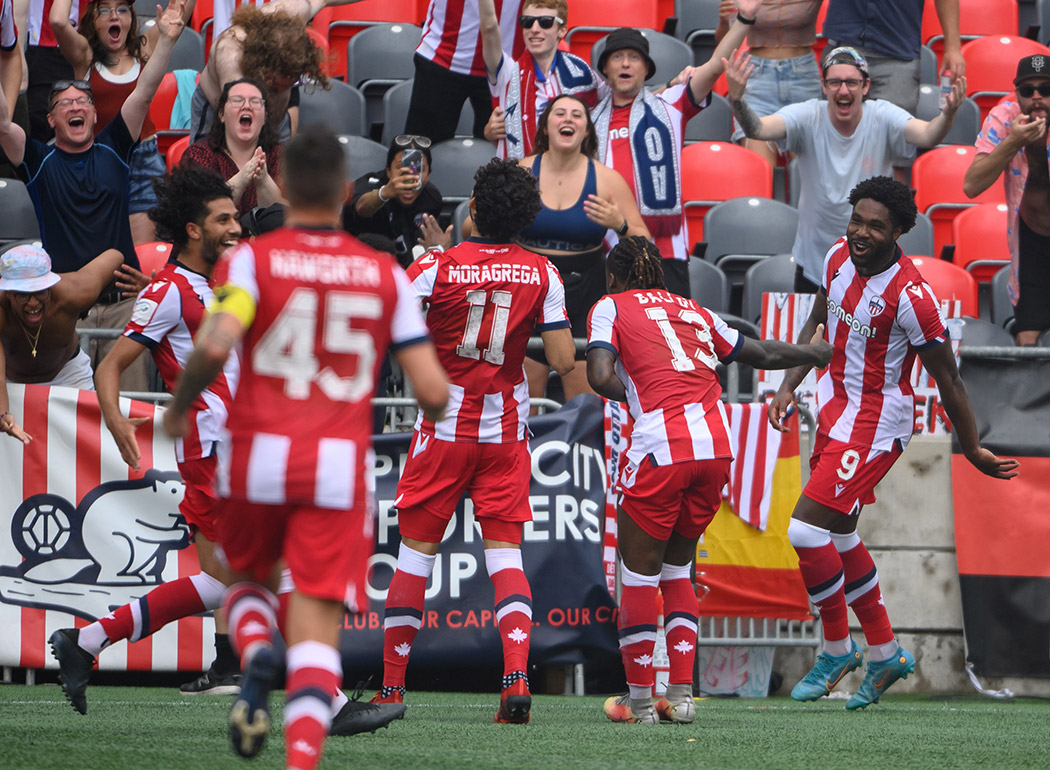 After an extended half-time break to let the thunder clouds clear, the teams returned to the pitch in warm sunshine. The chances kept coming: Ingham somehow clawed a Timoteo free-kick out of the top corner, Brian Wright curled a decent effort just wide, local Ottawa boy Gabriel Bitar cracked a long-range effort off the crossbar for Edmonton, Ballou Tabla curled a right-footed shot just over. It felt like another one of those Atleti games when the goal just wouldn’t come… but then it came. Abdoul Sissoko’s crunching tackle on Azriel Gonzalez game the home side a rare chance to counter quickly, and the Malian’s outstanding through ball put Tabla clear. He feinted onto his preferred right foot before snapping onto his left, thoroughly bamboozling poor Cale Loughrey in the Edmonton defence. Tabla slammed it home at the near post for a deserved lead. It was Ottawa’s first home goal from open play since Tabla’s equaliser against Calgary in early July.

Minutes later, it was two. This time Kevin Aleman played the through ball and this time Tabla’s thumping finish to the near post came with his right foot. Suddenly it was all sunshine for the home side: two goals to the good, over 150 U21 minutes in the bank. They even came mightily close to a third as Tabla once again broke through, this time squaring to Bahous, whose poked shot tricked wide. But Edmonton weren’t ready to give up and with Tobias Warschewski’s 87th minute free-kick that squeezed in at Nate Ingham’s near post, they created a nervy last few minutes for the hosts.

After the game, Gonzalez acknowledged the team’s difficulty in front of goal in recent games. “The forward players, they start to be sometimes in this dynamic in which psychologically they have an internal battle with the goal situation,” he said, before praising Ballou Tabla for his contributions. “He has unblocked this situation and now he can play with a little more psychological freedom. That’s very important for all of us.” Next up for Ottawa is a trip out west to play a Pacific side who may well have one eye on their big CONCACAF League clash with Herediano of Costa Rice three days later. With both sides tied in second place on 32 points, it’s a crucial test of Gonzalez’s men. Now that the dark clouds have moved on, suddenly it feels as though anything is possible once again for Atlético Ottawa.