Strikers dream of last-minute chances to win games. In Atlético Ottawa’s 1-1 draw with Valour at the TD Place, Malcolm Shaw got two. He missed them both.

And a repeating narrative is solidifying for Carlos Gonzalez’s men over the last three home games: play well, make chances, miss most of them, fail to win yet another game that they dominate.

To the home team’s credit, it’s a sign of how much they have improved that it now feels like draws are points dropped rather than points gained. They are very much in the hunt for a play-off spot, but another obstacle is slowly but surely coming into view: any team that doesn’t fulfil the requirement for 2,000 minutes played by domestic under-21 players will not be allowed to participate in the playoffs. Even though Zakaria Bahous and Zachary Roy both started for Ottawa tonight, both were substituted. Atleti will need to find 1272 more minutes – just under 100 minutes per match for the remainder of the season.

Both the opening and closing 20 minutes of this encounter were wild rides involving penalties, missed chances, attacks and counter-attacks. The 50 minutes sandwiched in between were rather less compelling. Valour came with a game plan to be physical and to disrupt Ottawa’s rhythm, and the plan worked well. From the neutral’s perspective, it created a frustratingly scrappy game that probably should have seen more than the three yellow shown to Valour players. 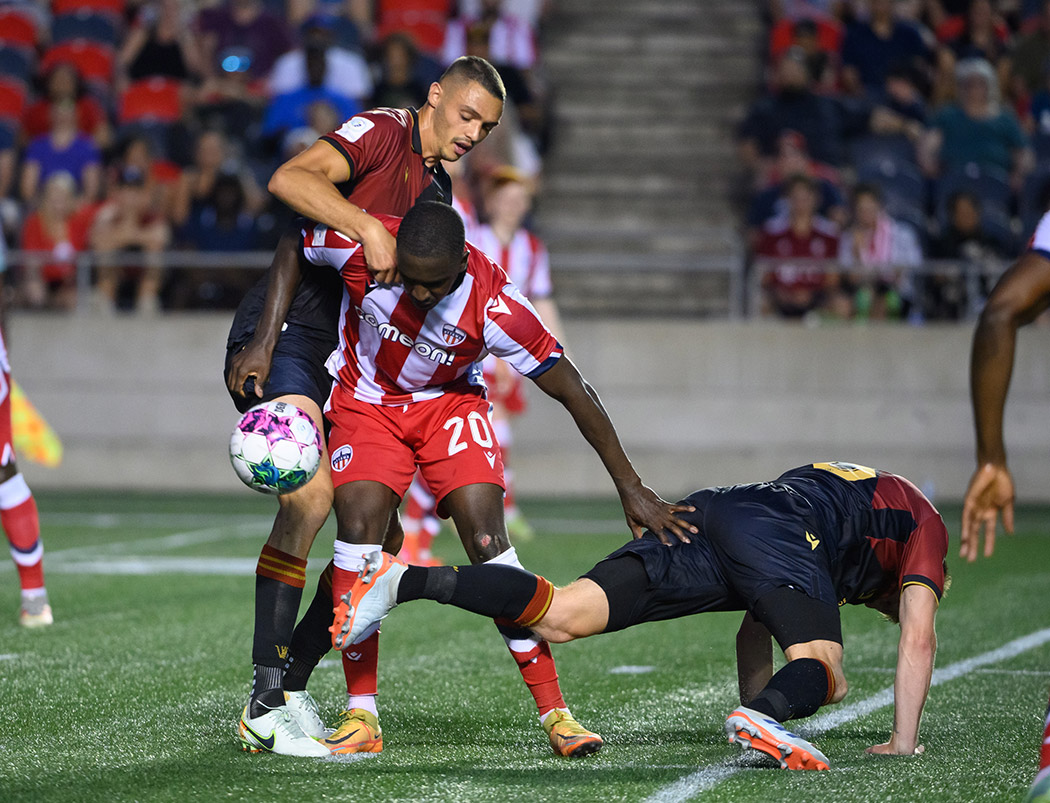 The frenetic opening, however, provided plenty of entertainment. Valour won a corner in the early exchanges, and it seemed like the referee Filip Dujic was the only person in the stadium to spot Macdonald Niba’s flailing arm. The replays confirmed that it was a good decision, but that did little to quell the sense of injustice in the TD Place, felt by Ottawa players and fans alike. Moses Dyer converted the penalty for an early lead for the visitors.

Minutes later, we had another spot-kick. Zachary Roy looked lively in his first start for the club, and his whipped cross clipped Andrew Jean-Baptiste on his left arm despite the defender’s best attempts to keep it behind his back. It felt like a much harsher decision than the earlier penalty, but Vladimir Moragrega didn’t care. He stepped up to stroke home his first goal for the club, and the big Mexican looked very relieved to be off the mark for his club.

In the attritional hour or so that followed, Valour looked the more likely to nick a goal. Moses Dyer was both a dangerous creative force and snarling physical presence, pressing aggressively and effectively. Nathan Ingham made a couple of very good saves, first from a dipping Walter Ponce drive from outside the box, then in parrying an angled shot from Federico Peña. The rebound just evaded Ponce’s lunge.

Then, slowly, Ottawa found their feet. Ballou Tabla brought his usual trickery, and Ollie Bassett typically covered vast distances in his relentless roaming playmaker role. The pair repeatedly caused trouble on the right, and that’s where Ottawa’s two last-minute chances came from. First, Carl Haworth found Tabla in the box. The winger could have on taken a shot, but instead elected to centre a pacey ball for Shaw. Just like last week against Cavalry, the striker’s brave lunge was just short. With 92 minutes on the clock, it felt like the final chance at a winner – but one more chance was yet to come. This time it was Ben McKendry free on the right. Shaw had plenty of space in the centre, but had to move backwards to make contact with the shot. It was a difficult technique but it was nonetheless a poor effort, miskicking the ball into the ground and leaving Jonathan Sirois with an easy save.

All in all, a draw was probably a fair reflection of a game that could have gone either way. Ottawa hit the road again this weekend, away to York before returning to the capital for games against Forge and Edmonton. By then hopefully Malcolm Shaw’s nightmares about those two last-minute misses will have faded into a distant memory.