At times it feels as though there’s a ring in Dante’s Inferno in which Atlético Ottawa and York United are condemned to play each other for all eternity, locked in a frustrating draw.

Of the nine times they’ve faced each other, eight have ended in deadlock. And Tuesday night’s 0-0 Canadian Premier League encounter at TD Place might go down as the most frustrating of all, particularly for Atlético Ottawa captain Drew Beckie, who received his second extremely harsh red card of the season.

Officiating leads to irritation and confusion

Criticizing referees is an unedifying business. This is a league still in its infancy and mistakes will happen. While Mathieu Souaré didn’t make many glaringly incorrect decisions last night, he was constantly overzealous and frustratingly fastidious, calling back throw-ins and free kicks that weren’t taken in exactly the right position and throwing cards around for reasons that were only occasionally clear.

It created an atmosphere of irritation and confusion among everyone present, from players to backroom staff to the always-impressive home fans at the TD Place. A total of nine yellow cards and two reds were brandished in a game that was by no means mean spirited – a fact highlighted by Ottawa head coach Carlos Gonzalez after the game.

“The reality is that I feel it wasn’t a dirty match,” said Gonzalez. “Too many yellow cards, too many red cards with, I feel, no need.” 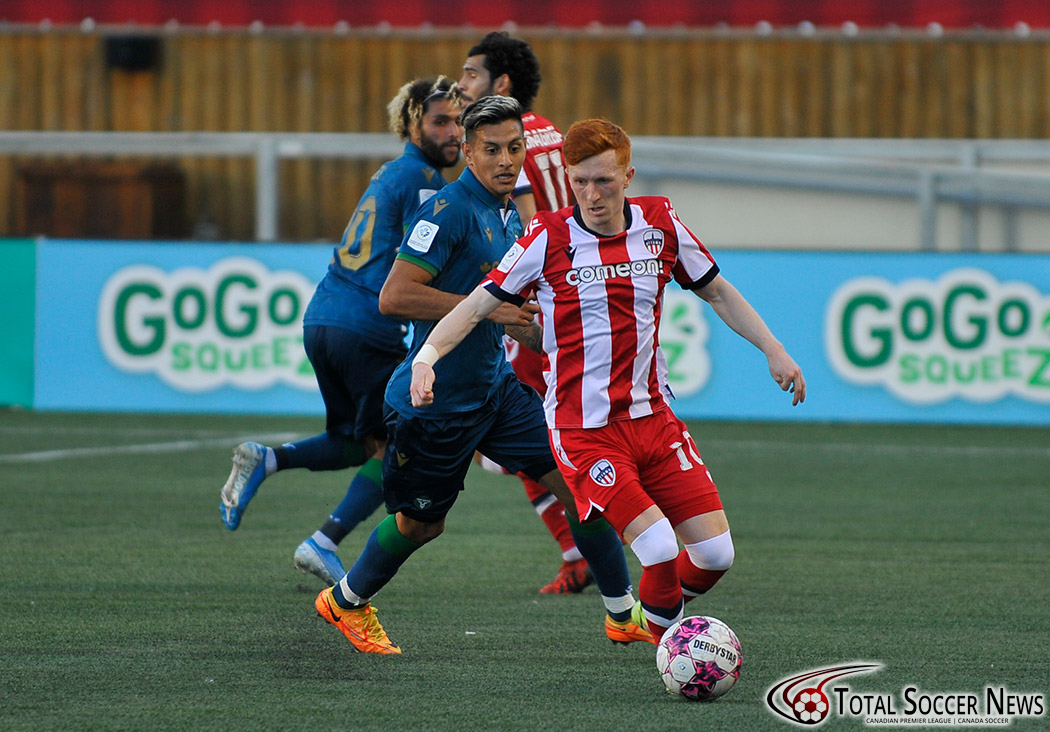 Beckie’s first yellow card after 58 minutes was perhaps the most inexplicable of them all. First Beckie’s defensive partner Diego Espejo saw yellow, apparently for dissent, before that booking was rescinded and handed instead to Beckie. Twenty-four minutes later he was off, getting into a relatively innocuous tangle with Osaze DeRosario on the right side. It was probably a foul, but a yellow was unquestionably harsh.

From the resulting free kick came the game’s most spectacular moment. Diyaddine Abzi whipped in a dangerous low cross that was bundled goalwards by DeRosario from almost point-blank range. Nathan Ingham in the Ottawa goal somehow reacted, seemingly at the speed of light, to not only get a hand to the ball, but to also claw it upwards and over the bar. It was a truly remarkable save, a block of pure instinct that was all the more impressive considering DeRosario’s touch was far from a clean one, putting the ball on anything but a predictable trajectory.

The last ten minutes were all York United as the hosts battened down the hatches. This was in stark contrast to the game’s opening, when Atlético were on top, pressing aggressively and passing with purpose and tempo.

Ollie Bassett had a long-range shot touched wide, but the hosts’ good start soon petered out. Bassett’s delivery from set-pieces was consistently poor, both from corners and from free kicks, and after a bright opening Ballou Tabla hardly had a touch until he was withdrawn after an hour.

The visitors started to slowly grow into the game, coming close with a volleyed cross from Lisandro Cabrera fizzing just wide with Sebastian Gutierrez sliding in just too late to get a touch. For all their hard work and effort, it was a game that saw both defences in the ascendancy with neither team managing to carve out any clear-cut chances.

York attacked down the left with Abzi, but on that side he met an Ottawa player in fine form: Miguel Acosta hardly put a foot wrong all game, tackling well and generally nullifying Abzi’s significant threat. It will be Abzi’s final visit to Ottawa as a York player – news of his transfer to French side Pau FC was announced after the game.

As the match came to a close with York having failed to capitalize on ten minutes of numerical advantage, Cedric Toussaint flew into a two-footed challenge on Carl Haworth. It was a nasty tackle and with this referee there could only be one outcome: red. As Souaré brandished the card, the home crowd finally had a moment of mild catharsis, cheering wildly on a frustrating evening that came with little to celebrate.

“If you can’t win, don’t lose,” said Gonzalez after the match, a mantra also repeated by his heroic goalkeeper Nathan Ingham.

The single point is enough to put the team level on points with Pacific on top of the table – albeit bizarrely with both teams on a negative goal difference. With five teams clustered within four points of each other at the top, it goes to show just how evenly matched this year’s CPL is.

From this frustrating evening in Inferno, the Paradiso of playoffs – or more – still feels possible for this Atlético Ottawa side.