Kyle Bekker didn’t read the script. In the 73rd minute, he had a rare moment of time and space to line up a shot from long range. It was one of those games that, a few key exceptions aside, only really had long-range chances thanks to two teams that were clearly content with a draw. Forge were desperate not to lose three in a row after their sudden and surprising loss of form in an otherwise impressive summer, while Ottawa still carried the trauma of what happened the last time Forge came to town: a brutal and ruthless display of finishing from the Hamilton men to inflict a humiliating 0-4 defeat on the hosts.

But Kyle Bekker is the sort of player who rises above such simple human fears. His battle with Abdou Sissoko in the centre of the field was the most compelling of several mini-battles all over the pitch: Sissoko was typically excellent at all of the unspectacular things he does so well: pressing intelligently, intercepting, playing simple passes to keep possession. But in the 73rd minute, Bekker drifted wide to get away from Sissoko’s area of influence before coming back inside and unleashing a thunder rocket of direct, assertive intent. That shot had everything that the Forge attack had lacked on a disappointing evening for their attackers. 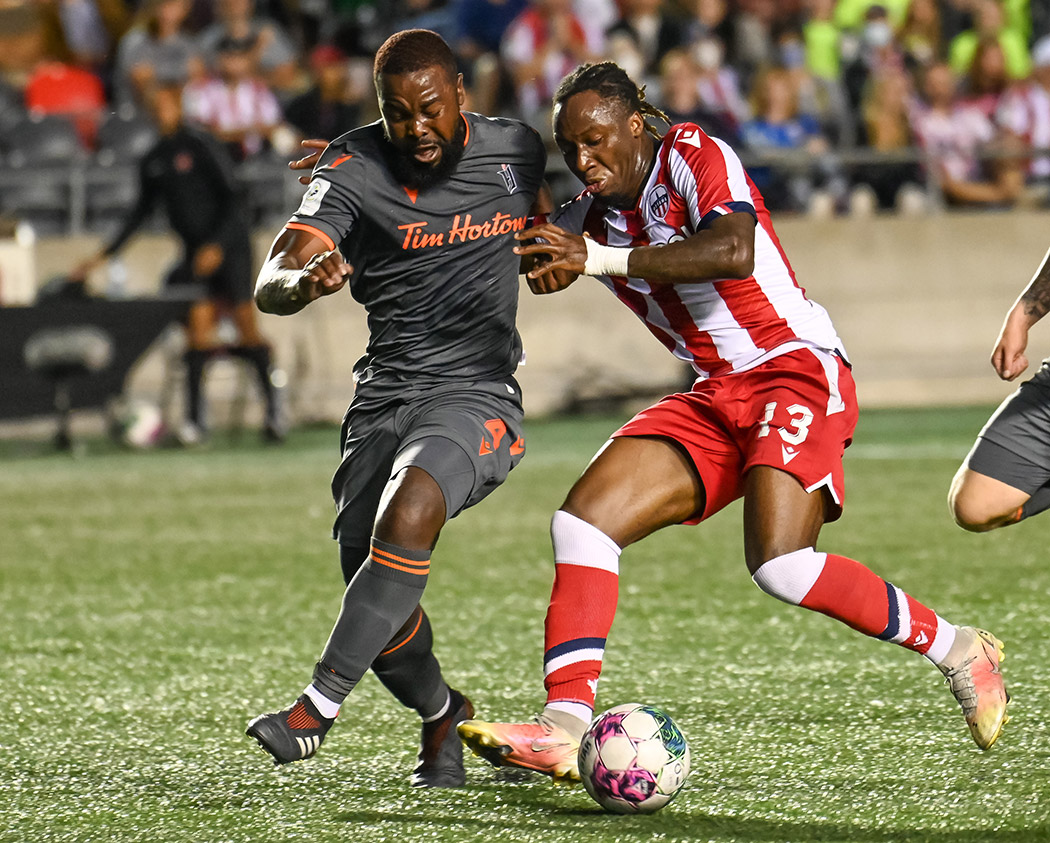 Ottawa’s tactical set-up had comfortably contained Forge: the low block when the visitors had the ball rendered their possession entirely sterile and worthless, while Atleti’s focused counter-press meant that they often won the ball back high up the pitch. Such an approach requires good coaching: it’s not easy to work as a team to press in certain situations and sit back in others. It’s to Carlos Gonzalez’s credit that his team is so comfortable with this set-up, particularly considering his tendency to rotate his starting eleven, and at times it felt as though they had exactly as much possession as they wanted and could win the ball back any time they felt like it. One of Ottawa’s best two chances came after a short period of possession after long period of not having the ball, with Tabla, Aléman and Sissoko linking up excellently on the left to engineer a chance for Maxim Tissot on a cut-back cross. The wing-back’s shot was scuffed slightly and presented no real danger to Triston Henry.

It’s hard not to blame the league’s format for the fact that both teams were playing well within their capacities. For the top two teams in a four-team playoff format, the priority is to not concede ground and not risk what they have. If this had been a straight winner-takes-all league, this would have been a very different encounter: Ottawa three points ahead, but Forge holding two games in hand. The incentive to win would have been strong for both teams. Alas, that’s not the game we got… except for that stunner from Kyle Bekker.

It was one of those shots that looked immediately perfect: rising, but not too much. Powerful but controlled. No swerve, but it didn’t need it when travelling that fast. Sean Melvin in the Ottawa goal – in for Nate Ingham, who was nursing a slight injury – flung himself at it gamely but he never had a chance. It cracked off the underside of the bar and clearly went comfortably over the line before bouncing back out. Play continued with surprisingly few complaints from Forge players, and even the post-match reactions were understated from both Bekker and Forge coach Bobby Smyrniotis. “It’s unfortunate nobody saw it,” he said mutedly.

There was time for one more chance. It came from yet another quick Ottawa counter, with Ballou Tabla as the outlet. His close ball control was simply outstanding with no less than three Forge defenders in close attention. Tabla tricked away from them all but left himself with a finish from a tighter angle than he’d have liked, and Henry reacted well to smother the shot.

Atlético Ottawa remain clear at the top of the table, albeit with more games played than their direct competitors. There are only six games left now: two at home and four away. Considering Ottawa’s outstanding away form this season, things are looking good in the capital.

Poor Kyle Bekker though. It was such an incredible shot.